Aim at heaven and you will get earth thrown in. Aim at earth and you get neither.

Short doco with ‘f2m: the boy within’ authors on Youtube

The thoughtful tourist’s guide to intellectual property via reading

Ever wanted to visit a place mentioned in a book?

We’ve put together a map of settings and locations for Hazel Edwards’ books, including ‘f2m: the boy within’. The setting could really be anywhere in Australia or New Zealand, so we chose to feature Melbourne and Wellington as the locations where we co-authored the book, communicating via Skype and email.

I love the Antarctic locations on the map – zoom in to those to see how tiny the research bases are, then zoom out and you’ll see the sheer scope of the continent and masses of ice:

How to browse the map 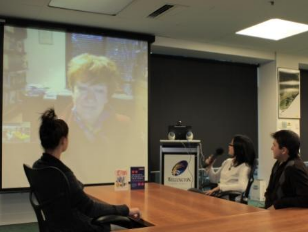 My co-author Hazel Edwards and I participated in a web chat with a group of rural youth in 2011, discussing our book ‘f2m: the boy within’.

The geographic constraints were obvious: Hazel in Melbourne, myself in Wellington, New Zealand, and the youth  in Wellington Shire, Gippsland, Australia – a detail we didn’t notice until the day of the chat.

The group’s questions were wide-ranging, including how to co-write and get published, the benefits of e-books., gender topics including finding support in rural areas, my personal experiences transitioning and media and librarian reactions to ‘f2m: the boy within’.

The first few moments of the chat revealed Phong Truong, Branch Support Librarian and organiser of the chat, to be female and not male as I had assumed. We all make assumptions about gender!

As a new author it’s exciting to have opportunities to talk to young people who have questions about gender, and especially rewarding to chat to your own readers. New technologies give authors these opportunities. Websites such as Skype an author network make it easy to find and get in touch with authors willing to brave the technical world to reach out to their readers.

Technical note: It’s not possible to have two videos appear on Skype simultaneously, though you can have as many audio channels as your bandwidth can handle.

Hazel Edwards and I are thrilled that our novel ‘f2m: the boy within‘ has been selected for The White Ravens in 2011.

Every year 250 outstanding international books for children and young adults are selected for The White Ravens list from nearly 10,000 books sent to the International Youth Library at Schloss Blutenberg in Munich.

The books are presented at this year at the Bologna Children’s Book Fair and become travelling exhibitions sometimes sponsored by cultural groups such as the Goethe Institute. 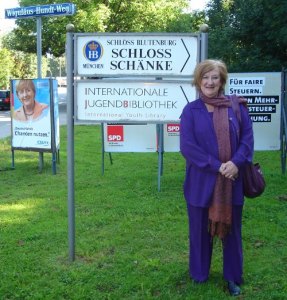 Hazel outside the Schloss Blutenburg in Munich

As well as research facilities for internationals interested in children’s literature, the Schloss Blutenberg, a former Bavarian hunting lodge, houses the biggest International Youth Library of 540,000 books in 15 major languages. The castle is a short train and bus ride from central Munich.

The library was founded by Jella Lepman, the the US advisor on Children and Women, who started the post war first travelling exhibition with 4000 donated books. Many use animal parables as Lepman believed that by using animals to champion the cause of peace for children’s sake, the books would be more widely read.

Jella Lepman’s post-WWII concept was to collect children’s books to promote tolerance for strangers outside borders, as well as tolerance for those with whom we live daily.

The historical collection of 90,000 books are those up until 1950, and many rare Eastern European copies are no longer available elsewhere. Scholars come to research books no longer available in their own countries due to Communist censorship or wartime destruction. The Geneva Collection of 30,000 books from the League of Nations which was given to the Schloss archives in the 1960s is also carefully housed in the cellar stacks  in temperature controlled areas.

The castle itself was built in 1432 also contains an historic chapel and a grassed courtyard, in addition to a picturesque lake with hundreds of ducks.