[Computing is] a place where you don’t have to be a Ph.D. or anything else. It’s a place where you can still be an artisan. People are willing to pay you if you’re any good at all, and you have plenty of time for screwing around. 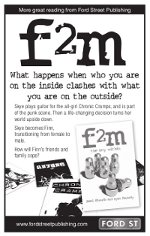 Well, not quite yet, but I’m guessing working like a working-very-hard-person in 2009 will pay off at some point, in terms of reaching my goals, if not cash (have I mentioned, writing doesn’t pay too well?).

Which brings me to my goals. I started my adult life with two goals, neither of which I thought would ever bear fruit.

In some ways I’ve achieved them both, although I spent most of my teenage years and twenties lamenting that I hadn’t come anywhere near it. I’ve written a book, and it’s being published. I’ve played in a couple of much-loved local bands, so you could say I’ve had at least a micro-taste of what it feels like to be a rock star.

This book has given me so much more than ticking an item off a list. I’m starting to think of myself as a writer. Finding myself looking for more opportunities to write, and thinking about my next big project, I’m plotting how to make this a full-time gig. I can put in the hours. I could really do this.

Cool promo ad: Paul from Ford Street Publishing has sent us this cool black and white ad for f2m:the boy within which will appear in future books. Thanks!

David Byrne concert - not Wellington but similar (photo by furnstein)

David Byrne is so weird! Still weird. He gives a small amount of himself; a slice in every song, and every song is a slice of him. But there seems so much more, a vast storehouse of David to be drawn out for years to come.

Wearing white, they were a canvas that the lights and sound painted and pasted on throughout the performance. Three then six dancers and singers drew us around the stage with the music in fluid motions. They only added, never subtracted or distracted. He played, they played, he played for two hours and we still wanted more. His smile of appreciation was genuine and we loved him for every minute of it.

I never realised I loved Talking Heads so much; it just grew. I saw the posters and had to see one of my heroes. His movements and words all have purpose – nothing is wasted or for show, yet it’s all for show – entertainment with meaning, without preaching, complaints or anger. Beautiful observations of human life set to vibrant pumping music.

This amazing conference was at Tapu Te Ranga Marae in Island Bay.

We were welcomed onto the marae in the traditional way, with a powhiri, waiata and hongi. Bruce Stewart introduced the place and its fairly unique history. Check out the website for his story, it’s fascinating. I haven’t felt such a spiritual connection to a place since living in Hanson St at the activist house. This was much stronger because of its history. It seems when people dedicate their lives to others their home builds up its own spirit that I can feel around me.

Youth work training – Some great ideas for getting people to come to grips with a potentially boring document: the Code of Ethics for Youth Work in Aotearoa New Zealand. We played memory games, talked about issues, did things with cards and rearranged sections. I’m making a submission, my other hobby.

Workshops – I’ve never done so many workshops in a row. Pretty sure this was the draining part of the weekend. I learned a lot from other people’s experiences and opinions. Sometimes I feel like Brooklynne and I are the only queer people we know – so valuable to get new outlooks, especially trans ones.

Concert – One minute I was asking the lady who taught us the waiata for its chords and the next I was second guitarist in Tiwhanawhana, accompanying about 30 singers and dancers. I joined their group!

Friends – Yay for new friends! I never got to go to things like this as an actual yoof of teen age so it was great to go and make lotsa new friends while I’m still vaguely young.

We voted at the end – to coincide with the Asia Pacific OutGames, Kaha Hui 2011 is going international!